Our company took over inherited the Mie 300mm fab from Fujitsu Semiconductor Limited. The fab started operations in 2005.
From the beginning of operations, this fab has been mainly providing foundry services for the advanced logic LSIs, and has established manufacturing, information management, quality control, and customer support systems for the foundry business In accordance with ISO14001, we pursue “Green Fab”.
According to the ISO9000 series and automotive IATF16949 certifications, we have established quality assurance and control systems.. Additionally, we have been making our utmost efforts towards safety and quality improvements. 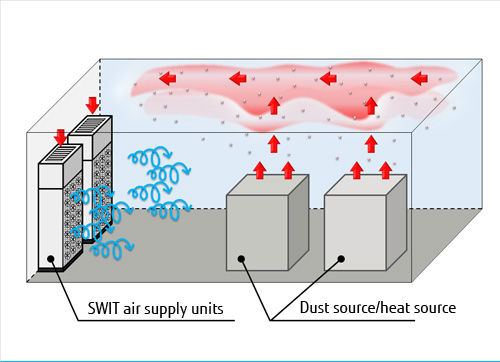 The cleanroom uses SWIT, or swirling induction type HVAC, which creates temperature strata inside the cleanroom, and works with rising air currents created by heat-generating equipment to carry airborne dust toward the ceiling. This makes it possible to maintain a steady temperature in the work areas at lower elevations in the room more efficiently, so that the volume of air being supplied can be lower than in conventional HVAC systems. Also, because this allows for air to be supplied at a higher temperature, the chilled-water temperature can also be higher, which contributes to energy savings. Compared to existing systems, the annual energy used is expected to be roughly 47% lower for transport power and roughly 32% lower for heat-source power (*1).

For our earthquake management, we are the first semiconductor fab in the world to adopt a hybrid seismic isolation structure. Three types of seismic isolation systems have been placed between the building and its foundation, which under normal conditions minimize the effect of fine vibrations, allowing us to achieve a stable supply for our customers.

Seismic Isolation System: “Laminated rubber supports”
A rubber bearing that absorbs vibrations and attenuates the swaying of the building.

As a countermeasure against instantaneous voltage drops or power failures, we have adopted LIC (Lithium-ion capacitor). This enables the continuous operation of a stable fab. 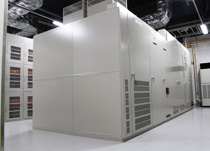